Hannah Flowers is a singer and harpist from St. Paul, Minnesota. Classically trained from a young age, she discovered Traditional Irish music as a teenager and hasn’t looked back since. Known for her sensitive and lyrical accompaniment of songs as well as her syncopated and rhythmic accompaniment of dance tunes, Hannah enjoys exploring the full depth of traditional Irish music and song. She holds a B.A. in music and a Master's Degree in Irish Traditional Music Performance from Maynooth University in Ireland.

In the past she has had the opportunity to study in Ireland with master harpists such as Grainne Hambley, Michael Rooney and Michelle Mulcahy. She has had the opportunity to compete in both harp tunes and airs and song (English and Irish) in the Fleadh Cheoil na Éireann in Sligo. Hannah is an accomplished lever harpist and singer and in recent years has developed an interest in Ancient Gaelic harp techniques, which led her to spend summer 2015 studying Ancient Gaelic harp at Scoil na gCláirseach, the Summer School of Early Irish Harp in Kilkenny. In January 2016 she gave a sold out solo performance at the Celtic Junction Arts Center as part of the “Next Step Fund” grant she received from the Metropolitan Regional Arts Council to study Ancient harping technique and compare and contrast it with modern lever harp style. Summer 2017 she was awarded a “Gaeltacht Summer Award” through Ireland-United States Commission for Educational Exchange to study Irish Language in the Gaeltacht in Gleann Cholm Cille, Co. Donegal. This experience fueled her fascination with the Irish language and led to her spending the subsequent summers of 2018 and 2019 continuing her Irish language studies in the Gaeltacht in Donegal.

As a singer Hannah found herself drawn to traditional songs in the Irish language and has learned dozens of songs from her longtime teacher, mentor, and friend, guitarist and singer Dáithí Sproule. Hannah’s studies in Ireland has fueled her interest in combining her singing and harp playing and make a name for herself as a harpist/singer with an understanding of both ancient harp techniques and an ear for the more modern sounds and techniques of Irish lever harp. Her passion is accompanying herself on the harp while singing songs, especially songs in the Irish language.

In late 2018 she released her debut album “Amhrán na Cruite/Song of the Harp” which featured twelve songs in the Irish language with harp accompaniment.  She was joined on the album by mentor and renowned Irish guitarist Dáithí Sproule, flautist and singer Cory Froehlich, sean-nós dancer Danielle Enblom, and fiddler David Ochs.

Hannah was awarded a Fulbright Student award in 2020 to pursue post-graduate research in Irish harp accompaniment and complete a master’s degree in Irish traditional music at Maynooth University outside Dublin, Ireland.

Apart from being an active performer on lever harp and as a singer, Hannah is a sought after harp and song teacher privately and at the Center for Irish Music, a non-profit community music school dedicated to handing down the tradition.

2015 Recipient of a “Next Step” grant from the Metropolitan Regional Arts Council used to study Ancient Gaelic harp at Scoil na gCláirseach (The Summer School of Early Irish Harp) in Kilkenny, Ireland

2016 Chosen as a “Young Ambassador” for the St. Patrick Centre in Downpatrick, Northern Ireland 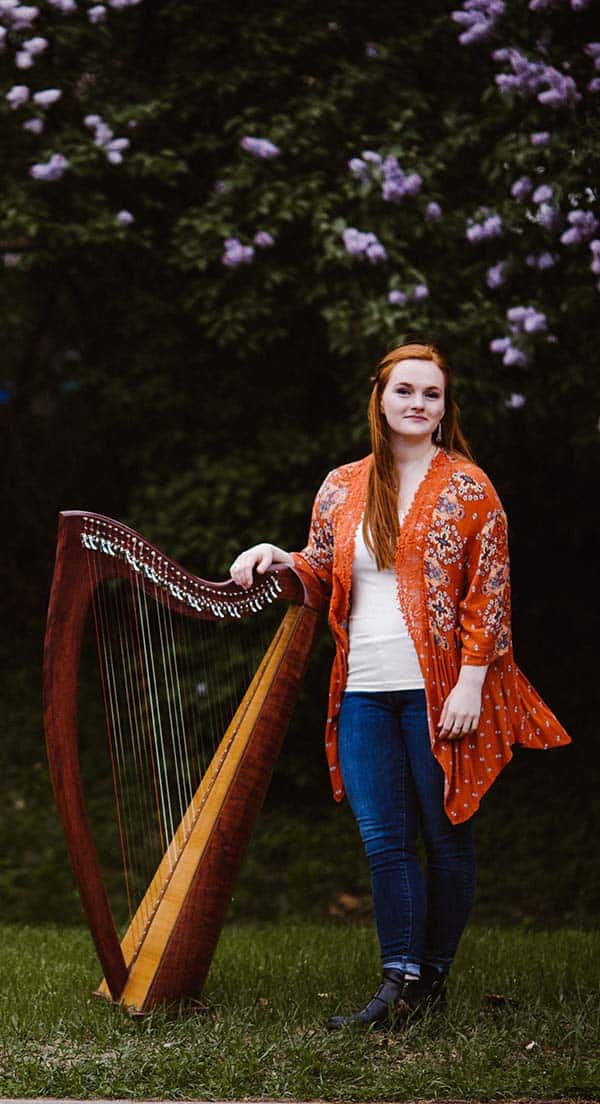