Why the Irish Harp as Accompaniment Instrument?

‘The harp that once through Tara’s hall,/The sound of music shed, /Now hangs as mute on Tara’s walls, /As if that soul were fled’.[1] This quote by the famous poet, musician, and writer Thomas Moore, written in the mid-nineteenth century, spoke of the decline of the native harp of Ireland. Despite his poetic claim that the Irish harp had passed out of existence, there is convincing evidence that the harp remained in use throughout the nineteenth century in Ireland.[2] The Irish harp made the successful transition from the periphery of traditional music practice to being an integral part of a vibrant revival of interest and practice over the course of the twentieth century. The past century of revitalization is due to a few individual musicians whose artistry, innovation, and performance practice led them to elevate and enhance the position of the Irish harp as a respected instrument within the Irish music tradition. The contributions of these musicians, as well as well-respected Irish harp organizations such Cairde na Cruite, led to the recognition of the Irish harping tradition on the world stage when UNESCO recognized Irish harping on its ‘Representative List of Intangible Cultural Heritage of Humanity’ in 2019.[3] This well-deserved recognition of the Irish harp and its distinguished position as a cultural icon in traditional music secures the Irish harp in its rightful place as a paradigm of Irish cultural musical heritage.

This blog post gives a brief overview of the Irish lever harp’s capacity as an accompaniment instrument in the twentieth century. This historical background serves as a basis from which to draw examples of three harpers who have used their instrument to accompany sean-nós, or traditionally unaccompanied, Irish song. The background helps contextualize the times and state of the tradition in which these musicians functioned and created. After the end of the nineteenth century when the Irish harp was mainly overlooked, the harp as an instrument took on a new role and form in the Irish imagination and popular practice. I attempt to illuminate the basic trajectory of the instrument from 1900 to 2000 through an overview of the three waves of harp revival in the 1930s, 1950s, and the 1980s, the significant figures in each wave, and the impact they had on the Irish harp of today.

At the turn of the twentieth century, the Irish harp was not widely practiced in Ireland. The tradition of Irish harping, which had enjoyed a position of great prominence in the past during the time of the Gaelic harpers, languished on the fringes of Irish society. However, from the beginning of the century a slow increase in interest can be charted through the inclusion of the lever harp in the Feis Ceoil, promotion through the Gaelic League, and the seminal role convent schools around the country played in the dissemination of Irish music and culture.[4]  In the 1890s there were no entrants in the Irish harp competition at the Feis Ceoil and thus the Gaelic League purchased several harps in order to promote the playing of the instrument.[5]  These events would fuel a burgeoning interest in the Irish harp, which paved the way for the future harp revival.[6]  Even though the harp is not a native instrument to Ireland, it is unique among the traditional instruments of the country in that it carries great ideological, political, and social implications as the national symbol of Ireland in its position in the collective imagination of the people in Ireland and abroad.  Apart from the three places mentioned above, the Irish harp was not widely practiced at the start of the century. Unlike today, the Irish harp was not widely used in the playing of Irish dance music. It was primarily played as a solo instrument, as well as being used as accompaniment for Irish traditional song.  This is known due to the inclusion of a competition for harp-accompanied song in the Feis Ceoil.[7] Although this competition rarely included more than four competitors, it played an important role in garnering interest in the Irish harp at the start of the century.[8]

From the start of the twentieth century through the 1930s and onwards, the harp remained primarily taught through convent schools run by Catholic orders.[9] There is little evidence of the harp being widely played or taught outside of all-female Catholic schools. The Sion Hill Convent school played a particular role in the preservation of the harping tradition through the concerted efforts of music teacher Sister Angela Walshe throughout the 1930s.[10] In the context of Sion Hill, as well as Loreto Abbey at Rathfarnham, the teaching and practice of the Irish harp flourished.[11] Through the efforts of these schools three young musicians were raised up who would have significant impact on the first wave of Irish harp revival in the 1930s.

The first small surge of renewed interest in the Irish harp tradition that emerged in the ‘30s came forth through the efforts of three key figures. Máirín Ní Shéaghdha, Deirdre Ní Fhloinn, and Treasa Ní Chormaic highly influenced the emergence of the Irish harp during this time. All three women learned their harp skills within a convent school setting in Dublin, and the first two harpists went on to win significant awards for their playing.[12]  They won multiple prizes at the Feis Ceoil in Dublin, performed for radio broadcasts, and were invited to play at Celtic Congresses in Ireland and other countries.[13]  Most importantly, their style of harping is marked by their self-accompaniment of Irish song.  These three women were the first harpists to popularize this newly revived form of Irish music in the twentieth century.

Of the three harpists, Máirín Ní Shéaghdha went on to have an especially illustrious career not only as a professional musician but also as an active crusader for the Irish harp. She gave at least one lecture at Sinn Féin headquarters about the terrible state of Irish music and culture. She claimed the reason for the sad state of Irish cultural heritage at the time was due to ‘general depreciation of our standard of culture and the multiplicity of inventions, such as wireless, gramophones, film pictures, and advances in the development of musical instruments from the ancient to the new’.[14] She went on to assert that the only way forward to revive the harp was to have a renewal of ancient Irish culture. Her bold assertion that Irish music and culture lived in a depreciated state due to modern technology and instruments was a common narrative of the time and an age-old debate. At the end of the previous century, Douglas Hyde delivered a well-known lecture on the necessity for the de-Anglicization of Ireland in order to reclaim the Irish people’s autonomy by promotion of the Irish language and cultural heritage.[15] A few decades later, Ní Shéaghdha called for the return to ‘old Irish culture’[16] and claims that the development of new instruments played an integral role in the loss of traditional Irish culture. 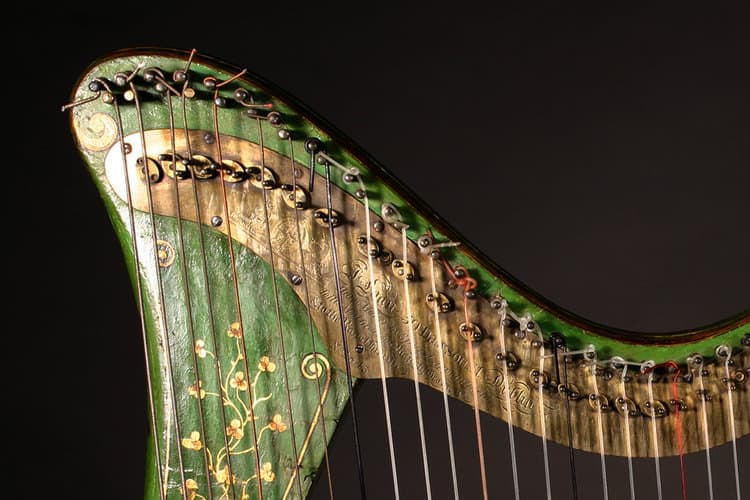 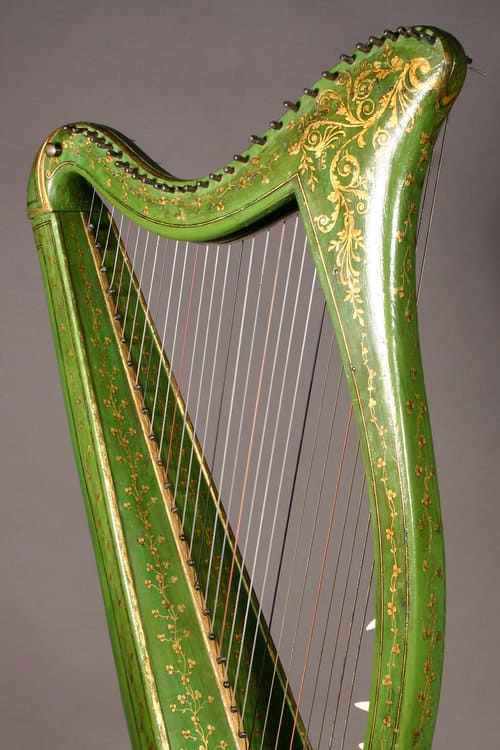